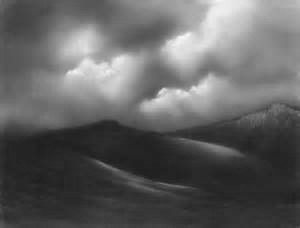 As torrential rain poured down and Storm Katie loomed large on the horizon, most sensible folk made the choice of going underground in OFD to keep out of the weather. However, this was not the case for a few intrepid, if not insane, walkers. Sue, Bernard and myself decided to walk from South Wales Caving Club at Penwyllt back to the cottage at Ystradfellte. We were not deterred by the fact that something approaching a tornado was heading for Britain. After all we were mature and experienced outdoor types weren't we? What were a few raindrops and a bit of wind to us? As we came away from Penwyllt we encountered a party of intrepid Duke of Edinburghers battling their way uphill, loaded like pack horses. We wished them well in their endeavours.and proceeded on our way. We started along the tramway,S eventually joining the Beacons Way footpath, when the rain started to come down in relentless sheets.

As the weather deteriorated even further one of the party suggested taking another footpath, but this could have taken us well out of our way. Fortunately, one of our party had the sense to tell us to keep to the main route, which was a good thing as by now we were all soaked to the skin.  The water was even spurting out of our boots. There comes a point where you are so wet you just accept it. Bernard seemed to be concerned about the possibility of exposure, but I felt this was unlikely as we were not in the Arctic! We kept up a pretty cracking pace considering the conditions. Actually, I think it was sheer desperation to get back to Godre Pentre and wring ourselves out.

Eventually we reached the old farmhouse on Pant Mawr and decided to take the shortcut through the farmyard and out onto the road. To say it was awash with water was
no exaggeration; in fact we found ourselves wading ankle deep in swirling slurry. It was then only a short distance to the river and back home to the cottage along the  roadway. Not an item of clothing was dry and our mere presence soaked the cottage floor. But once in dry clothing, sitting by the stove, with mugs of hot steaming tea , we were soon in good spirits. Sue and myself thought it a great adventure despite the wind, the rain and the slurry river, and had a laugh about the whole episode. Bernard, however, still kept muttering about hypothermia and that it would be a lot better on a clear day, but where would the adventure be in that?

Author:
Linda Wickham
‹ An excursion to the lost Forever World in the Back-of-Beyond Vein with Hamilton Hamster and Siriol Squirrel up May Bank Holiday trip in OFD ›