The Excavation of Baldwyns Folly Mine 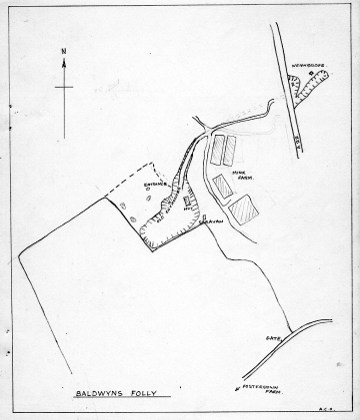 Baldwyns is one of the many old hearthstone mines that exist in the area of Godstone Hill (A22). The mine is probably one of the more recent mines possibly being started as recently as a hundred years ago. lnformation about the mines is very hard to find, but from what there is it appears that the mine had a reputation for being dangerous.

Not only was there a danger from getting lost in the vast maze of tunnels, but also because the mine was dug in shattered rock intersected by cracks and faults which rendered the roof very unstable. Vast quantities of timber was supposed to have been used in some passages to maintain the roof. It was because of this unstable condition of the rock and the poor quality of the stone that the mine became known as Baldwyns Folly. The mine was apparently small in size with narrow passages. Unlike the other Godstone caves transport underground was by hand barrows and lighting probably by candle. The stone was cut with picks and wedges the marks of which can clearly be seen on the soft roof stone of the mine. An air shaft lined with tin at TQ34755324, now demolished, probably belonged to this mine.

The mine being on the west of Godstone hill was probably at one time under the ownership of the Upwood Quarry Company who also owned the adjacent arch Quarry. The mine was not a commercial success and closed down.

The mine remained disused for some years and became a playground for children. Gardener tells of a German spy who was supposed to have been concealed in the mine during the first world war.

After the cave began to collapse the local council blocked the entrances in 1931.

The mine almost certainly connects with the neighbouring Arch cave. At some time in the past this connection appears to have been walled up. The connection was rediscovered several years back when the wall was pulled down by some explorers. This walling up probably occured when the mine closed down and the connection was no longer of any use.

The entrances to Baldwyns Cave used to lie in an old open cast quarry behind the Mink Farm on Godstone Hill (TQ347532).These were backfilled in the 1930s in order to block off the mine. However these entrances can still be traced and in one place and in one place a short crawl can be made under old railway sleepers which once supported the passageway.

Many collapses have taken place in the field to the north of the quarry which can be seen as large depressions. These probably block all the original entrance passages underground. In 1967 a new collapse some 10ft deep and 10ft diameter was noted on the northernmost line of collapses. This new collapse was in a direct line with one of the old entrances. A dig was started in the hope of entering the old mine. Unfortunately after the dig had reached a depth of 12ft it was filled in again and the dig was left for about a year.

A borehole taken in the area of Baldwyns recorded the beds as follows:-

The rock in the area is intersected with numerous faults and cracks some several feet wide. Inside the mine these cracks can be seen in the walls and the floor often filled with deads. The general quality of the rock is poor and the roofstone very unstable. The mine was renowned for its unstable condition and the vast quantities of timbering required to support it. The state of the stone is obviously how the mine became called Baldwyns Folly. 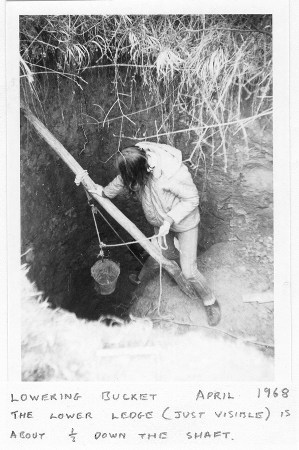 On 24th May 1968 digging started in the collapse for a second time. The old dig had silted to about 2ft below the floor of the collapse and digging was resumed in the same spot. By the end of the day a shaft reaching 20ft below ground level had been dug. The shaft was bounded on one side by a solid rock wall consisting of the lower chalk. The other side of the shaft was loose fallen ground which appeared to be fairly sound. A spar was placed across the top of the shaft so that buckets could be hauled up on a pulley. The debris thus removed was dumped in an adjacent depression.

On the 7th April the dig was continued. This time a depth of 28ft was reached. At about 25ft a layer of boulders was passed. These rendered that part of the shaft somewhat unsafe. At 27ft several traces of wooden beams were found, one slanting at an angle across the corner of the shaft. At this depth it was found necessary to use a ladder to descend the dig.

On April 28th a sheet of iron was placed in the shaft in an attempt to deter the seam of boulders from moving. The dig reached 30ft and the solid wall began to show signs of becoming less regular.

On May 19th shoring was carried out at the top of the shaft.

The dig broke through on July 1st 1968 at a depth of 32ft below ground level. After the removal of several boulders from the base of the dig a narrow fault opened up and gave rise to a considerable draught. It was just possible to see through to a cavity on the other side. Another hours digging removed enough rocks from the rift to see through clearly to a chamber on the other side. However the rift was only 1ft high and 6ins wide and it took another hour of chiselling the solid rock to enlarge it enough for someone to squeeze through. On the other side was a single chamber, a dead end at the far end and backfilled on both sides. The entrance rift itself was entirely a natural crack in the rock. It appears that it was a complete fluke that we managed to enter at this point. The passage entered is completely unaffected by the entrance collapse but an adjacent collapse, not visible on the surface, blocks the passage just by the entrance rift.

A dig was started in the backfill on the north of the chamber. This lead via another backfilled chamber only 2ft high to a second dead end chamber. This was again blocked at the east by a rockfall. This fall is probably the result of the entrance collapse. 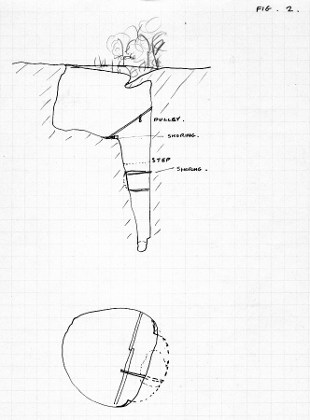 On 8th July digging underground was continued in backfill next to the fall in the second chamber. After 10ft this was abandoned as the passage wall turned in under the fall itself.

On the 29th July digging was started in the backfill on the south of the main chamber. This immediately revealed a passage behind the cemented wall. The passage lead straight to the roof fall that is marked by a depression above ground, and in to which we were dumping the debris from the dig. Luckily this could just be passed to enter a chamber bounded on three sides by dry stone retaining walls.

The wall at the end of this chamber was obviously more recent than the other two. The other two were also white washed to 3ft above the floor indicating that they marked the sides of a once longer passage. Digging was started in the end wall. This led straight to a wooded arch held in place by cemented brickwork. Behind this a back filled passage led away.

ln the collapse chamber were two roof props. One was a circular prop and the other constructed from railway sleepers. This was firmly secured with two small wooden wedges. Also on the walls of the chamber were painted the numbers VI either side of-the passage. This might indicate that it was once an important passage.

Digging was continued in the backfill and about 20ft made in well formed passage with a badly fractured roof. Before the dig could be revisited the entrance collapsed. This was almost certainly due to severe rain which fell all day on the 15th September 1968 and which caused serious flooding all over the south east of England.

Only one photograph was taken while the cave was open and only a rough survey was produced.