The thoughts and words of Chairman Eric, part 2 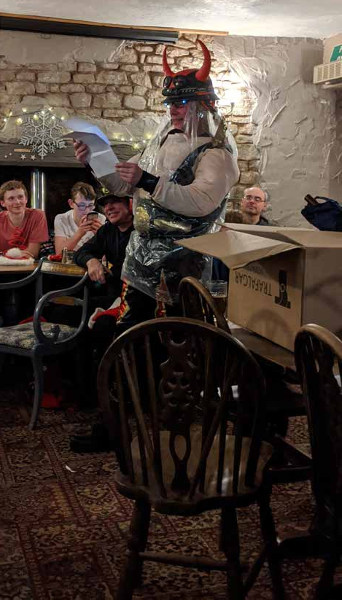 "I joined Croydon Caving Club because my
therapist said by comparison it would make
me look normal." Hmmm... (photo: James Thorne)

In order to boost my green credentials, and to avoid sending the original to landfill, the following drivel has been recycled from my 2018 annual dinner address.

My earliest experience of searching the Internet for references to myself was around 2002. The first hit was a quotation from Pelobates which I had completely forgotten about. It related to a competition to complete the sentence: “I joined Croydon Caving Club because…” My entry was: “I joined Croydon Caving Club because my therapist said by comparison it would make me look normal”. That was my story then and I am still sticking with it!

In the absence of anything else to talk about it did make me wonder what the Internet had to say about the committee of the time. Below is what I found in the winter of 2018, interpret it as you will.

Paul Stacey (born 27 September 1963) is a British guitarist and producer, best known for his work with Oasis and The Black Crowes. (Source: Wikipedia)

Paul is modest and never mentions has achievements.

James Thorne is an English professional footballer who most recently played for Hartlepool United as a forward. (Source Wikipedia)

Peter Hamilton (born 2 March 1960) is a British author. He is best known for writing space opera. As of the publication of his 10th novel in 2004, his works had sold over 2 million copies worldwide.

Well, we sort of guessed.

Allen Ockenden was one of almost 35,000 South Australians and over 416,000 Australians to enlist in the First World War (Source: Anzac centenary)

It appears that Allen is even older than we realised. Allen Ockenden It looks like you've reached the end.(Source: Google+)

It finally explains the ventriloquism.

Linda Wickham: WE NEED YOUR HELP! One of our shelter buildings heating/ac units has died and we need to replace it before the worst of winter hits. (Source: Go fund me)

We knew she has a lot of properties, but we didn’t realise they are publicly funded.