The Caves of Margate

There are maybe 20 or 30 showcaves in the UK. The main caving regions obviously contain the lion's share of these but there are other odd caves, mines and tunnels dotted about all over the place. Down in a sleepy corner of Kent is the seaside resort of Margate, which never seems to have recovered from the 1950s. It is, perhaps surprising that this town should have a show cave at all but amazing that this town has not just one but two! Making it no less than the show cave Mecca of Kent.

They are both close together in the chalk hill of Cliftonville at the East end of the town. Owned by the family business who still run the Chislehurst caves, the Margate Caves are a rather low key operation, quaintly old fashioned in its approach. They consist of a series of fine vaulted passages which from their appearance are in fact an old underground chalk quarry of the type which abound in Kent. A curious double chambered excavation has been created below the floor of the main cave known as the dungeon. It's is difficult to asses but certainly was not a mining operation and must have other social or ritual purpose.

Further evidence that this cave found new uses somewhere in its history are a rather garish collection of wall paintings which adorn the walls. The commentary which replays on a continuous loop tape recording to accompany your self guided visit conjures up tales of the occult and ritual sacrifice but this is no more plausible than the theory that the caves were used by smugglers in another phase of its history. I was unable to locate any trace of the passage that supposedly connected these caves to the beach for this purpose.

The steep flight of steps that take you down the main cave is a relatively new addition. The cave would have originally been entered via a shaft and later via the cellars of the Vicarage (now demolished).

The Margate grotto is entered through a shop dedicated to rocks and fossils. A much more sophisticated operation than its near neighbour. This is very strange tunnel and who constructed it and why is not known. It is a single tunnel about 100ft long entered by steps at one end and passing a circular chamber to terminate in a square room at the far end. The whole of the walls and roof are covered in elaborate shell decoration in complex patterns which must have been a labour of several years for its creator.

As with many underground tunnels of this nature that seem to engender tales of the occult and fantasy which are probably well adrift from the real truth. Many bizarre explanations for the existence of this cave have been put forward over the years. The guide book would have you believe that it is over 1000 years old, and of Phoenician origin. The more likely explanation, perhaps, is that it is some kind of Georgian folly.

Both caves are curiosities in their own right and worth a visit, if by chance you are passing that way. 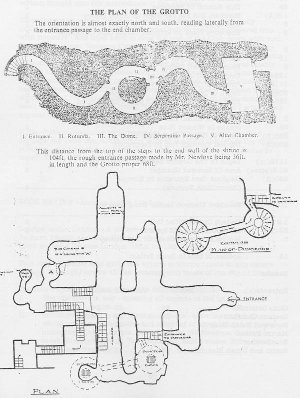