An Overnight Jaunt in ODF (and a quick cottage celebration)

It was the weekend of a party (almost). 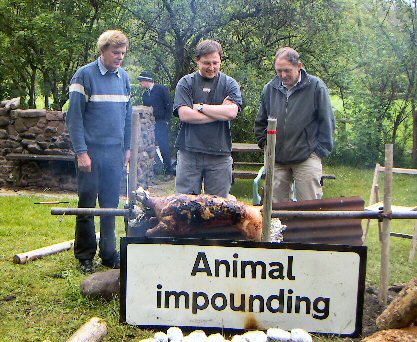 Croydon Caving Club was beginning celebrations for the 20th anniversary of Godre Pentre, the club's cottage. All was going well, with a lamb roasting over an open fire and copious amounts of food and alchohol ready for the party. Then a note arrived around 5pm from South Wales Caving Club that there was a rescue in progress in OFD and that Croydon Caving Club would be needed. 3 CCC members were already underground helping with the rescue as they were at SWCC when the incident was reported.

Upon receiving the note, CCC called SWCC to determine when we should turn up to help and how many people would be needed. The controller told us that the rescue would require as many people as possible and would be a lenthy process. Our inital call-out time was logged as around midnight and so any ideas of a long boozy night were quickly extinguished.

By 10pm all of CCC were in bed trying to catch a few hours sleep before heading over to SWCC for our now confirmed 1am call-out. CCC arrived at SWCC at 1am with 14 members, of which, 11 went underground and 3 stayed on the surface to help SWCC caterers with the not inconsiderable task of providing food and drinks for the 150 people involved in the rescue, as well as contacting any additional cavers who might be able to help with the rescue. 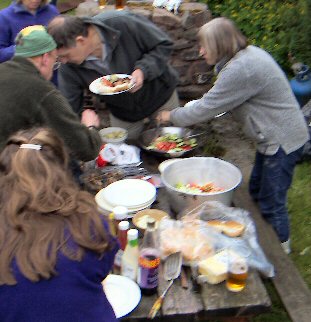 Initially when we arrived, the hope was for an early finish to the rescue, say 8am or soon after. Around 4am it was becoming obvious that earlier estimates were considerably inaccurate and that more cavers were needed.

So at 4.30 in the morning, club members were to be found standing outside the SWCC cottage, calling every caver in their phone books to see if they could turn up. Conversations tended along the lines:

CCC: HELLO! Is that PBC?
PBC: Yes...??
CCC: Where are you?
PBC: On holiday.
CCC: Oh, where?
PBC: Gower.
CCC: Oh! Excellent. Why are you talking so quietly?
PBC: I'm in a tent and don't want to wake the rest of the club up.
CCC: Really? Well SPEAK LOUDER AND WAKE THE BUGGERS UP! There is a rescue in OFD, you're close and you're needed!

I have to be fair and say that everyone that answered the phone was helpful and was willing to come to SWCC from where-ever they were. Thankfully, we also managed to find a replacement doctor from amongst those we called, to relieve the doctor who went underground when the incident was reported had been underground for over 12 hours.

By the end of the rescue, nearly 160 people went underground of which 12 were members of CCC with 4 members staying to help on the surface.

Next there are a couple of reports from those underground, each from a different party.