Going away with the "Students"

Summer 1998, I managed to wangle my way onto a "student" expedition to Slovenia with Imperial College to a little Swiss cheese hill called Migovec.

This was the 5th year they had been to the area so the expedition was well advanced. It is supposedly a joint expedition with the Tolmin caving club but as this club consists of Andre (who's factory we invaded for showers) and about 3 other members, there involvement was minimal. They also had a penchant for 30hour trips and then back to work for a week (I'm getting too old for that sort of thing)

You may remember an article in Descent called "Mig goes big", they were not exaggerating. Last years exp. extended the cave from about -350 to -980 ending with a 7m deep pool (hopefully a perched sump). There were plenty of leads to explore and I was excited with quotes like "we had to leave a black hole in the floor there as we ran out of time" and "don't know what is down there, we haven't looked yet".

I flew out with an ex ICC student, Janet, and Hugh Penny collected us at Treviso airport (if you call a grass strip in the middle of a town with 3 Nissan huts an airport) and surprisingly, did not crash. We drove to Tolmin in Slovenia (about 3hrs). It was a great relief to escape from Italy to a far more civilised country. The others were due to arrive on Sunday so we introduced ourselves to the farmer at Ravné where we were base camping. There had been an earthquake in the area a few months earlier, which had damaged the farmer's house so he could not live in it. This was excellent news for us as we moved straight in. Some of the others who arrived later decided that it was too dangerous to sleep in the house so camped next to it (right next to the walls in fact!!!, and these were supposedly intelligent students…). This fear was soon overcome when we had 5 inches of rain in one day and half of the tents leaked!!!

A leisurely stroll up to the high bivi with our kit. 1000m climb and 25kg rucksack full of caving gear etc. The others did not arrive that evening due to not having a valid green card and not being allowed over the border until Monday morning.

Students arrive. A very motley crew of hung over and knacked cavers arrives. Bus taken up to Ravné and unloaded. The road up to Ravné was rather exciting as the bus would not fit round some of the corners and had to unload half way. The plan was to spend the next 5 days kit hauling to the top Bivi. Somebody had read that you should not carry more than 1/3 of your body weight so out comes the kitchen scales and spring balance for a weighing session. Believe it or not, I was the 3rd heaviest at 75kg (not as heavy as Hugh though). This set my load of kit at 25kg (56lbs).

That evening, we met the local inhabitants of Ravné. There was a small-tented encampment near by and we heard that it was a local scout troop. Not much interest developed until somebody noticed that a Slovenian scout troop was nearly all female and between 14 and 18. More about these "scouts" latter.

After a swim in the Šôçä river (not the correct spelling but they like loads of accents in Slov, actually pronounced Socha) some of us retired to the "bar of ill repute" where we were told that you can buy pills…….

That evening, we were invited to an evening of music and dancing with the scouts. The farmer got out his accordion and the dancing started. If you ever meet a Westminster caver called Tetley, ask him about the evening!

The next morning we started of for the hills. One last beer then up the hill.

First in the cave. Myself and Clewyn start of down to re-rig the Titanic / Britannic series where they had left a hole in the floor last year. The entrance series was still rigged with last years ropes but do I really care. Headed in with 2 full tackle sacks of rope and bolting kit and got back down to -350m where they left it last year. Found the "permanent" survey station and placed 2 bolts ready for tomorrows trip into the unknown. Back to the surface for a dinner of fried mush. This was a small trip of about 11 hrs.

The rest of the expedition were re-rigging some of the scarier traverses and replaced some the entrance series bolts and ropes.

Clewyn was on the sick list with a knee injury so went back down with an ex ICC caver called "Scuz" (real name Sarah but her nick name was far more applicable). Rigged the new pitch (only 12m) and then found "Olympic" pitch (38m). This had been named last year but not discovered. That's how confident they were that it was a going lead. This ended in to rocky floor with a narrow rift heading off. This is quite typical of the cave except this time the rift was blocked by a large bolder. We attempted to survey out but had forgotten the tape measure so looked in a few more holes and left. 14hrs

Some of the others did a camp supply trip and looked at some more leads in the main highway.

Sleeping in the sun day

Back to Olympic with a crow bar. Eventually moved the bolder to create the "perilous squeeze" as the bolder was left perched over the entrance to the rift which was also a pitch head. As I am such a gentleman, it was ladies first. Scuz squeezed through with a lot of **** and **** which was her trade mark. She got through and descended the 14m pitch to another rock floor which eventually turned out to be a giant bridge over another pitch. I descended this and named it "Canberra". This was the end of our rope (literally as we had to drop the last meter or 2 onto a boulder and the bottom of the pitch). Huggy had caught up with us by then and helped us look around the bottom of the pitch. This seemed to be a meandering rift with various large boulders making the floor we were standing on. We decided it was time to retire and started to survey out. After surveying out and some minor side passages, we returned to the land of the living. 16hrs 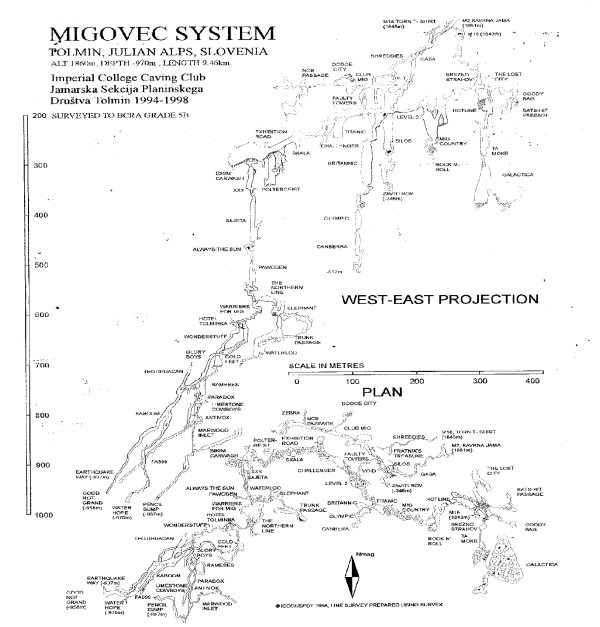 Time to leave for Blighty. We quickly put the survey data into the laptop (solar powered of course) and looked at our new extensions. The second deepest section of the cave and still going. I was now very sad to leave as there were many other going leads still to be looked at. It was a sad and painful walk down as my knee had eventually given way.

A well organised trip (quite a shock really) with a lot of sponsorship (Compaq laptop, Solar cells, University, food companies etc……). Well planned and a superb area. The catering was especially well planned with Darren drums of flower etc being carried to the bivi and bread being baked most days.

The rest of the expedition stayed for another 4 weeks but did not crack the elusive 1000m mark. After some hydrological studies done by Huggy and Janet, it is looking more likely that we have hit a water table at about 980m. There were 2 talks at the conference this year and next years expedition planning is underway.

Author:
Phil Brooks
‹ Cottage News - May 1999 up Underground in Cappadocia ›